The mouse that has taken up residence in my house is quite the crafty little creature.  This morning I woke to find he set a trap of his own.  He knows me!  It won’t be long until this entire endeavor turns into a Rube Golberg contest, “MOUSE AGAINST MAN.”

Speaking of men, I wonder if I could catch a man with that trap?  I’ll need to secure a loan for the bait.  Yet, in order to obtain a loan, I’m going to need to catch a banker.  No bank is going to give this girl a loan.  How does one catch a banker?

On second thought, I think I’ll just go back and lay my head in that trap.

How To Catch A Man 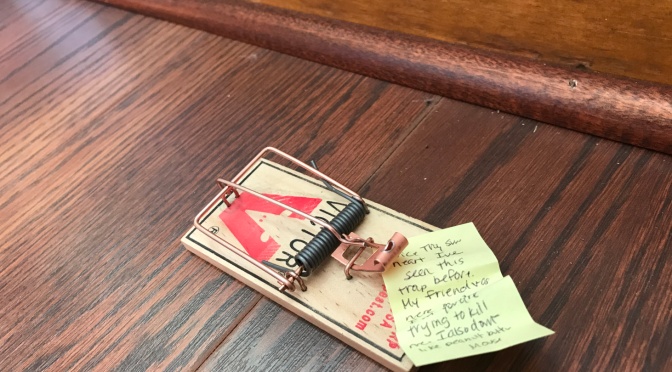 I had to watch 2 youTube videos to learn how to set one of those “snapper your necker” traps without amputating a finger. It took – NO lie – an hour.  There it sits. Beautifully set like a pro, might I add? The only thing missing is the tiny red carpet. It is not surprising that this mouse wrote me the following note:

Good try sweetheart, but I saw an old friend I lying around in this thing. I hadn’t seen him in a few winters.  I thought he might have moved south but, nope, it looks like he didn’t quite make it.  It was a sad surprise to find him when I moved back in here on that cold, wet day last week.  I found the poor bastard dead, and by the looks of him I’d guess 1-2 years dry. Now, I ain’t all that smart but this here sure looks like the same contraption and it smells, oddly reminiscent of him and of… peanut butter.  I’ve gone off the peanut butter. I hear it can kill you.

The mouse was right.  An Ex-BF set that trap for me long ago.  We broke up and I didn’t have the foresight to think ahead and have him set some alimony traps for the future. Lesson learned.  Anyway, I forgot it was sitting under the couch until the scratching began.  I went to fetch it, as it was the only trap I had left over. Quite unfortunate that it was “occupied.” The sight of him was a bit distressing. He was dried stiff-and-tight between the little silver snapping bar and the wooden dock.

The funny side of jaded and angry